Sigma Prime is leading the development and maintenance of beacon-fuzz, a differential fuzzing solution for Eth2 clients. This post is part of our series of status updates where we discuss current progress, interesting challenges encountered, and direction for future work. See #00 and the repository's README for more context.

Lots of Eth2-related fuzzing has happened at Sigma Prime over the past few weeks! Great progress was made by the Beacon Fuzz team:

Honggfuzz is an easy to use evolutionary fuzzer (developed and maintained by Google) with the following interesting features:

In the latest benchmarks published by Google via their project FuzzBench, Honggfuzz seems to be more efficient in terms of reached coverage (code blocks) than AFL and libFuzzer.

We've decided to experiment with Honggfuzz to leverage its different set of mutation algorithms (compared to libFuzzer and AFL). This was a great decision considering that this new fuzzing engine helped us identify the bugs described in this article. 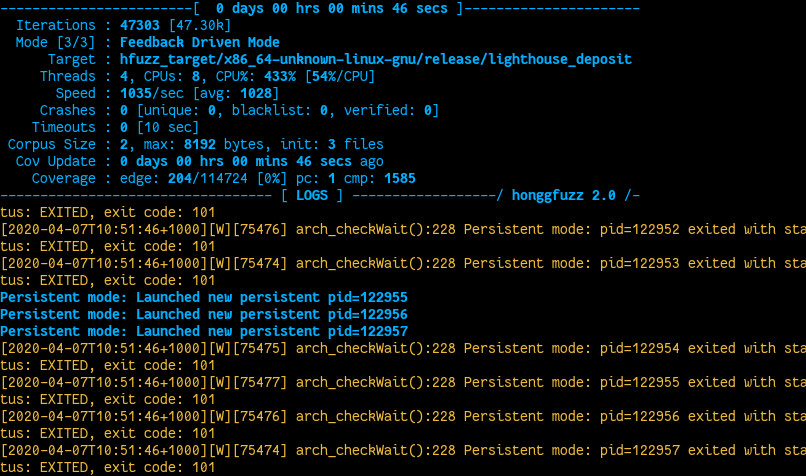 Over the past few weeks, we decided to get a better view on the code coverage of our fuzzing inputs. As such, code coverage reports were produced using Kcov, indicating a coverage of more than 84% using the eth2spec tests:

This allowed the identification of the two bugs described in the following sections.

We've also started rewriting Beacon Fuzz in Rust (from C++) as the team is more familiar/experienced with this language.

Honggfuzz found a crash in Lighthouse related to our SSZ decoding which failed to ensure that all offsets were in-bounds for variable length types.

When decoding a specific, custom, mutated BeaconState SSZ file, Lighthouse tries to allocate too much memory, causing a memory allocation failure which leads to a panic. The affected function in our SSZ crate is pub fn decode_list_of_variable_length_items<T: Decode>

In fact, this is an attack vector that Paul had identified last year.

We thought we had a test internally that would catch this particular case, but as described in this issue, the error we were catching in the relevant unit test was in fact unrelated to the test case we wanted to cover.

This bug was quickly addressed by Paul and a fix has been submitted in this Pull Request (to be merged soon).

When fuzzing the BeaconState struct in debug mode with Honggfuzz, a panic was triggered by a multiplication overflow when attempting to get the Beacon proposer index for a mutated BeaconState.

Indeed, the underlying issue stems from these particular lines (see the function compute_proposer_index):

The Beacon State is currently considered as a trusted container: it is internally constructed and iterated by clients and cannot (at this stage) be provided as an externally user-supplied input. This might however change as future syncing strategies might enable beacon nodes to request BeaconState objects from peers for faster syncing (as opposed to requesting block batches).

This is important as some of the bugs that our fuzzing effort will identify won't necessarily be exploitable (including the overflow described above). However, it's important to clarify the overflow assumptions of the eth2 specification, and this bug lead to an interesting discussion.

As a result, the remerkleable Python package maintained by protolambda and used in the python executable eth2 spec has been updated to provide stronger guarantees on overflows.

The team has also been making great progress in integrating Teku (formerly known as Artemis/Harmony):

Patrick has recently joined the Beacon Fuzz crew and has been instrumental in achieving the milestones decribed in this article. We're really glad to have him onboard are look forward to working with him closely on Beacon Fuzz over the coming weeks and months!

Mehdi is a co-founder and a director of Sigma Prime. He is a penetration tester particularly interested in decentralised systems, with a strong focus on the Ethereum platform.